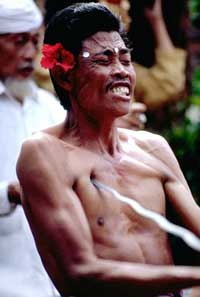 Book your date with us now.

Found only in a few villages, the trance dance is scared, it used to be performed by Balinese people in earlier times to contact the spirits ancestors. Sitting in front of the temple priest, two underage girls are put into trance by the temple priest, the Pemangku. The priest, accompanied by a female choir, make offerings to the deity asking the celestial nymphs to descend from the Heaven and dance before the people through the bodies of the girls. Even though the girls have never had any dance training, they dance harmoniously with closed eyes. Then a man, accompanied by two male choirs, and ridding a hobby horse dances with closed eyes through a fire made from coconut husks. The songs of the men’s chorus lead him jumping repeatedly into the fire but surprisingly he remains unhurt.